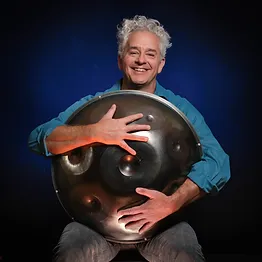 Thomas Schroyer began playing in the early 90s after discovering world music while working and traveling in SE Asia. His passion for percussion lead him to study in India, Cuba  and the Middle East while expanding his  repertoire through the years playing the hammer dulcimer, marimba, Persian santoor, piano, accordion, and other percussion instruments.

His spiritual work with vipassana meditation in India,  led Thomas to create “The WAVE”, a sound bath/ecstatic dance combination in the 90’s throughout the NW and  worked as a musician for ecstatic poetry concerts. His daily yoga practice begin in 2001 when he became a certified Sivananda yoga teacher and then later became certified in sound healing.

Thomas’ work  also includes being music director for “Theater of the Invisible”, and composing music for several travel films. He has also performed in venues such as Portland Art Museum, Portland State University, Oregon Country Faire, Beloved Festival, Breitenbush Retreat Center, and yoga studios/retreats in Mexico and throughout the US.

After a virus greatly diminished his hearing in his left ear in 2009, he transitioned to  performing silent and physical theater but continued to use music as a catalyst for his work. All changed in 2018 when he discovered  the “spaceship" ~  a rare steel percussion like xylophone called a handpan.

Feeling very fortunate to return back to his passion, Thomas now devotes the majority of his time playing handpan and doing sound baths. His vision is to take the listener into an ecstatic meditative journey using eastern tunings with his melodies and trance rhythm.