Why were 118K Souls Soothed by this B15 Kalimba video?! The B15 Kalimba by Hokema

We put an upright version of this video on our new @Hokema.us account on Instagram, and were astounded when it reached 118K views in 24 hours. When we asked folks what they liked about it, many replied the combination of the lower tones together with the visual of watching the tines "wiggle" brought about an incredibly soothing effect. So we also made this 2-minute YouTube version and hope it brings you a moment of joy or repose today. While listening to the video is sweet (shot in the Mountains near Taos, New Mexico), we can tell you the effects of holding one of these kalimbas in your hands and playing it for yourself truly gets the serotonin flowing...

Introducing the new B15 Kalimba by Hokema Kalimbas. At first glance, the B15 appears similar to its sister instrument the B17: made from a beautiful block of American Cherry wood upon which metal tines fan out to be played by the thumbs. But look closer: you'll see on this instrument there are two rows of tines with the ones on the bottom being thicker, producing soothing lower tones. When combined with the higher notes emanating from the tines on the row above, pleasing chord combination can easily be created on  this kalimba by an intuitive player - simply by creatively combining  the higher and lower rows. 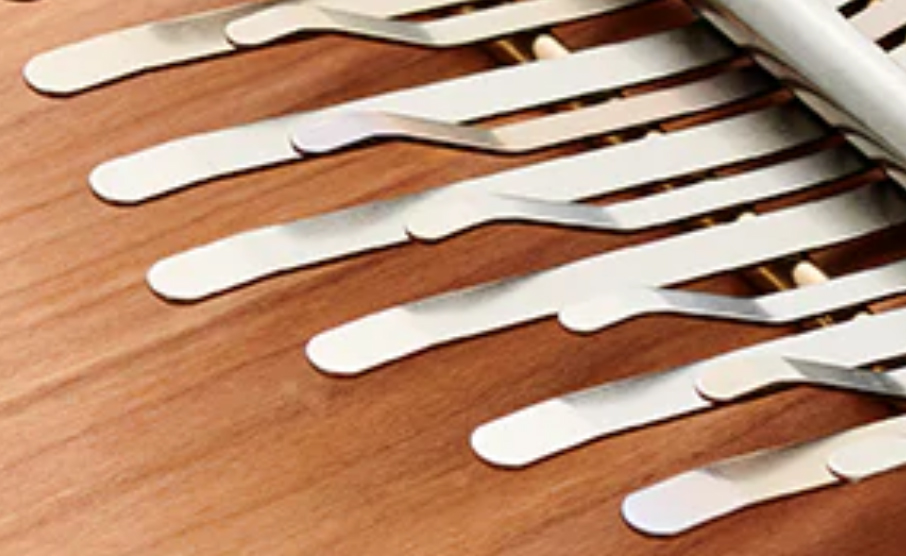 Kalimbas are metal-tined instruments which originated in southern Africa (thousands of years old) and can now be found in countless variations all over the world. This new model along with many other kalimba versions including the Sansula and Kalimba Electro can be found on our site. Listen to the short video above then check out and compare all our Kalimbas from Hokema

We now carry two larger kalimbas that one might refer to as "keyboard kalimbas". This is because the metal tines are organized into diatonic scales arranged so triads are next to each other, allowing one to easily play chords and accompany songs. Both instruments come with small colored chord magnets that can be placed above the tines to remind a player which chords to play. These kalimbas are ideal for musicians who wish to add something special to their soundtracks or accompany singing. They can also be played intuitively like all our instruments, but with more notes to choose from there are more note combinations that are both harmonious and dissonant. It does take practice to create compositions or learn songs, but it's good to know you can also pick these up just to mess around on and have fun making gorgeous sounds.

The B15 Kalimba (brand new!) differs in that it has 2 rows of tines, with the bottom row being thicker - producing lower tones. It has 2 fewer notes than the B17 as the thicker tines take up more space. What's special about this kalimba is how easy it is to create nice-sounding chords because of the layering of the two rows where two complimentary notes can easily be struck at the same time.  *G-Major is its default tuning. The B17 Kalimba has 17 tines (2 more tines than the B15) and all of them are on the same plane side by side. These tines are all thin so the notes are higher in range. Because they're closer together, it's easy to slide your thumb upward to create lovely glissandos (a series of notes that blend into one another). It's also easier on this instrument to visually see triads of notes next to each other when playing song chords. This kalimba comes tuned to *C-Major.

*Like all our kalimbas in the Hokema line, these kalimbas can be retuned to alternate scales using our handy tuning tool!